Still being spring, the weather can still a little temperamental here, but the forecast promised beautiful weather coming in from the south over the next few days. So we decided to do a little road trip, hunting for sunshine. We left Christchurch and drove south towards Wanaka for a brief national parks tour. We cooked a nice curry down by the beautiful Wanaka Lake at sunset, and I(!) removed Scott’s stitches, before continuing out to Mount Aspiring National Park. We arrived late and we slept in the parking lot waiting for daylight.

There had been a late dumping of snow just four days earlier, so not knowing what the conditions were going to be like in the mountains we kept our plans loose. We followed the Matukituki river valley into the park. It was a nice and easy walk and we had timed the weather perfectly, it was warm and not a cloud in the sky! Once we passed the Rob Roy glacier turnoff a few minutes up the track all the tourists disappeared and we had the park to ourselves. It was a beautiful day and just so nice just to be out on trail again!

We stopped for a brief lunch on Pearl Flat while deciding what our objective should be. The warden at Aspiring hut had told us that there still was a lot of snow left in the park, and while the sun had already melted most of the snow down in the valley, there was still a considerable amount left on the mountainsides. Nursing a work injury, Scott was in no condition to do any serious climbing on this trip, but we still wanted elevation for some nice views. Our original plan had been to climb up to the French Ridge hut on the true left of the river, but this track is quite exposed in places. So, without snow gear, we opted for the Liverpool hut on the opposite side of the river instead.

We crossed the swing bridge at Liverpool Stream and began the slippery climb in the snow up to the bushline. Typical New Zealand bush track, steep and technical. Once we cleared the bushline the track sidled across steep exposed shingle and rock, which at this time was covered knee-deep in snow. Since we had left our crampons and ice axes behind this bit was a bit tricky and we actually met some people who had turned back because of it. By the time we got there though someone had already kicked steps across the snow, so we pressed on for the hut. I was huffing and puffing pretty good on this climb, crazy how fast you lose the trail fitness when you are not out doing it every day! 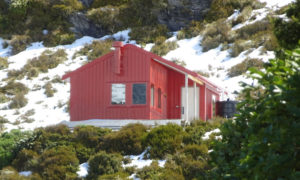 All the sweat is worth it in the end though. Liverpool hut (1,100 m) is a fairly new and basic but very nice 10 bunk hut overlooking the Matukituki Valley and with an absolutely stunning view of the Mount Aspiring summit. We shared the hut with six other hikers, the ones we had to thank for the snow steps, but it would have been a full house if it had not been for those people turning back earlier.

We enjoyed a few hours of sun on the deck surrounding the hut before sunset. Oh, and what a sunset. It presented Mount Aspiring in its very best light, turning the snow-capped summit pink as the light faded. Truly magical!

The rest of the hut was still asleep when we left the next morning. What a difference from the day before! The mountain was completely covered in a thick blanket of fog. No views today! We met a poor mountaineer who had planned to summit Mt Barff that day, but he turned around when he realized the views would be obscured, postponing it to another day. Too bad after all that arduous bush climbing. We wanted to get an early start down before the snow started melting and would turn the descent into a true nightmare. It was intense enough as it was, steep and very, very slippery. Probably a bit more adventurous than what Scott’s arm should have been subjected to, swinging from trees down a mountain side, and my legs were shaking by the end, but we got down in one piece and enjoyed a nice snack break by the river before heading back to the van.

We are still chasing the sun, so we will continue driving north for a quick stop in at Aoraki/Mount Cook National Park and then up to Arthurs Pass National Park. 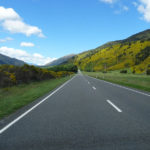 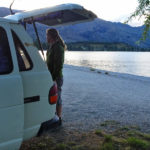 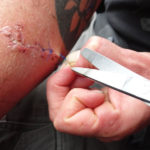 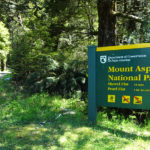 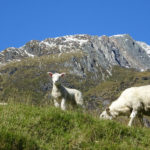 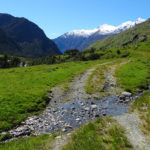 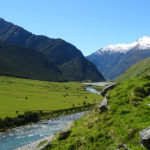 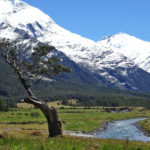 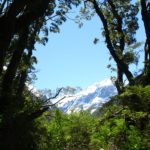 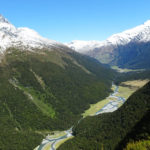 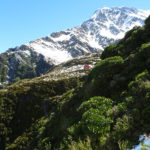 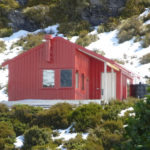 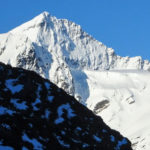 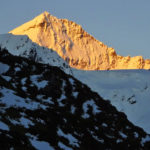 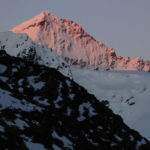 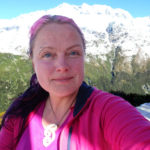 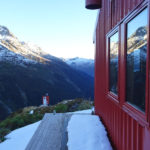 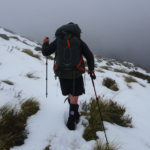