The Oregon section June 22 — July 12. I decided to take a double zero (two rest days) at the charming hostel in Ashland to sort out a few personal things and give my swollen shin a chance to rest. I like small hostels like this one, housed in an old historic villa. A nice and quiet place to rest. I also like Ashland. It is is an interesting place with its quaint mix of hippies, Shakespearian actors and tourists. When stopping in for a drink at the local pub, a metaphysical energy healer found out I was a PCT hiker and offered to work on my swollen leg. Not sure it did much of anything, but the sentiment was nice.

The hitch out of Ashland was easy and it felt good to be back on trail. I am rather excited to be done with California, it is a huge state that once had seemed endless. Whoever says Oregon is flat has obviously not hiked it. It looks a lot “flatter” on the map, and while it is a lot easier than previous sections, with less dramatic passes to climb, it is far from flat. Most days continued in the Northern California fashion of lots of ups and downs all day. I had not expected Oregon to be quite so dry though. Southern part of the state meant several long water carries. The worst spots made infinitely more manageable by a few strategic water caches though. Again, a big thanks to these amazing PCT trail angels!

The water scarcity meant either carrying water to dry camp or walking between water sources. I prefer the latter, when possible, which meant pulling several big 30+ mile (~50 km) days and I arrived at Crater Lake a full day earlier than planned. My feet were protesting a little bit at this since the volcanic rocks in the area are sharp and hard to walk on. Totally shredded my trail runners too, so I am picking up a new pair for Washington at the REI in Bend. At least my swollen shin is returning back to normal, the rest in Ashland finally did the trick.

The trail has been pretty nice and dry for the most part. Not a whole lot of snow left here, which has been really nice. It has also been a lot warmer, some days downright hot, and it feels like summer finally. But the warmer temperatures also brought on the mosquitoes! Southern Oregon was pretty horrendous in this regard, but thankfully it mellowed the further north I got. I hope to stay ahead of the swarms. As long as you keep moving you are ok, but as soon as you stop they are on you like mad. Good thing I don’t stop much anyway, and walking 10 hours per day means bedtime pretty much as soon as I pull into camp. Setting up camp is an interesting exercise though, wearing full hiker hazmat suit (ie: rain gear and bug head net), lol. In a particularly bad spot I ducked out of my tent before bed to pee, without protective gear, I shook a handful of mozzies out of my sleep shorts (so in other words previously attached to my bum) when I got back in the safety of the tent again. Geeez!

I picked up a resupply box in Crater Lake and realized I had managed to land in another hiker bubble. We are some 6-9 PCT hikers on our way north in the area right now, all at different pace though and I did not see them again, save for one exception. I am still going solo. The PCT is still closed for a few miles though the Crater Lake area from last seasons fires. The detour takes you up to the Rim Trail, an alternate most hikers take anyway since it skirts the big caldera with stunning views of the beautiful blue lake. The PCT route is nowhere near as scenic. It was a nice hike once I left the visitors center and the amount of tourists eventually dropped off.

I am heading towards Bend in 6 days at an average of 27 miles per day next. This section was a lot more scenic and enjoyable than the prior, and with less mosquitoes as a bonus. Beautiful dry trail lined with heaps of wildflowers and I have seem more butterflies than I could possibly count. I have had sporadic reception through here as well which has been a really nice change. I generally don’t care about mobile reception when I am hiking, but it has been wonderful to talk to Scott more lately. It can be hard to stay connected given the time difference to New Zealand and the bad reception along the trail, but we make the best of it.

I rock into Bend on the fourth of July, great timing to hit a major city… but I luck out and grab the last bed at the hostel due to a last minute cancellation. I like staying at these small hostels, you can choose to be social, or not. It is a nice and relaxed atmosphere and here they offered a well stocked self serve breakfast and even a keg of beer for the holiday weekend. I had a lot if chores to tend to while in town. I needed to repair some gear, get new trail runners and also send off all my resupply boxes for Washington, 5 boxes! My feet also looked terrible and my body ached for some reason and I cannot for the life of me figure out why this is happening now, after walking 2000 miles — yeah that just happened whoot! — my body should be used to the routine. So I decided to take another double zero to get sorted. It worked. I walked out of Bend feeling strong again.

I picked up another resupply box with food at the historic Timberline Lodge, known for serving as the exterior of the Overlook Hotel in the iconic movie “The Shining”. These days better known for the best buffet on the PCT. Turns out it is a huge commercial resort with bus loads of people everywhere, I felt really out of place and did not stay. I just grabbed my food box and a late lunch then moved on.

The most notable feature of the northern half of Oregon is definitely the majestic volcanoes along the trail. The first few days out of Bend was dominated by Mt Jefferson followed closely by Mt Hood. Leaving Timberline Lodge I chose the Paradise Track, an alternate trail to the PCT, which brought me up above the treeline closely skirting the base of Mt Hood. It meant a bit more climbing but I enjoyed stunning 180 views and a beautiful display of the local wild flowers all morning. The PCT stays lower, sidling the mountain hidden in the trees and this acquaintance with Mt Hood was much more impressive and scenic. There were also a lot of lakes and ponds throughout this section and I have been fantasizing about a swim. Unfortunately the mosquitoes have deterred me thus far. I am working up the courage…

I walked into Cascade Locks midday, on a super hot day, so I headed straight for the ice cream stand before doing anything else. Priorities… and just like that, I am done with Oregon… Tomorrow I will cross over the Bridge of the Gods, and into Washington — only 505 miles (812 km) left to go! 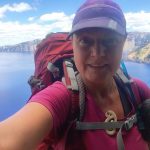 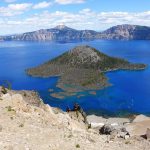 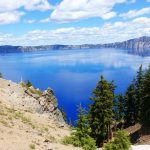 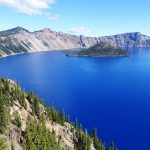 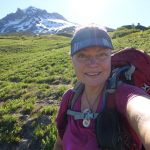 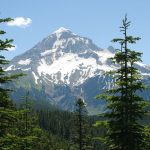 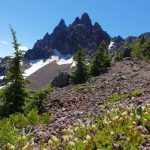 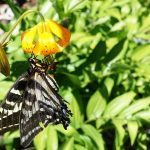 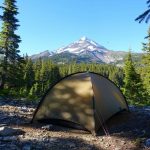 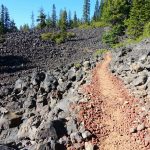 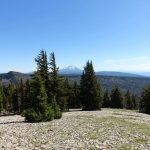 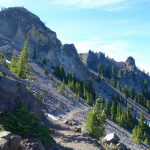 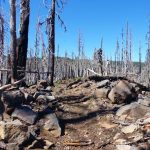 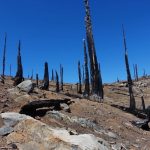 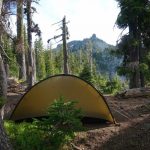 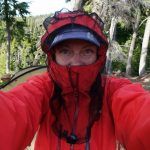 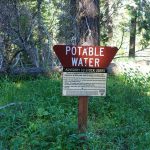 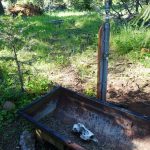 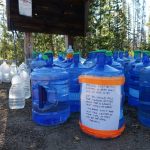 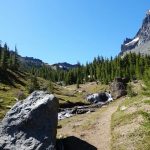 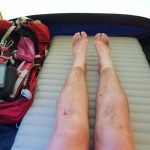 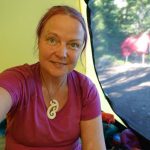