Major dilemma!!! Severe weather warnings for the Tararua Ranges as I am about to head up there.

Heavy rains and severe gale force wind up to 160km per hour and 200mm of rain (!) forecasted. Even if I wait out the storm, the locals don’t recommend me going up there alone anytime soon due to the high water levels in the streams, washouts, mud and falling debris… what to do?!?!?

Well… I decided to put the Tararuas on the back burner. Will try and circle back to it later. Continuing south. Safety first! So, since I decided to postpone Tararuas to a later date this is my final report from the North Island.

I hitched down to Waikanae and picked up the trail there and continued south toward Wellington. Walking down the coast in gale force wind gusts up to 140km/h was exciting… and wet! Luckily the winds had subsided somewhat by the time I got to the Escarpment track out of Paekakariki. This is a pretty cool track of Te Araroa, brand new for this season. It runs high above and along the coastline with narrow paths on 45-degree slopes and hanging walkways over steep drops toward the ocean and road below. Good thing I don’t suffer from vertigo. A bit of excitement too since it was still pretty windy the day I went through…

What followed was some less inspiring urban sprawl but then a surprisingly nice and rural walk the last bit into Wellington. Some pretty nice tracks with spectacular views. Can’t complain.

Then finally I was standing there… at the southern terminus of Te Araroa on the North Island. Wow! I have walked a whole freaking island!!! North Island is done. It is almost hard to believe!

But no rest for the wicked… a little celebration last night, then spent all day today planning and pulling together a 42-day resupply! Food drops for the top half of the South Island. I even had to borrow a cart from New World to drive all the stuff over to the post office! Totally insane!

I can’t wait to get down south now! I take the Interislander ferry across tomorrow morning. Sweeeeeet!! 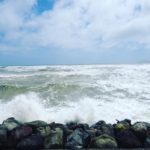 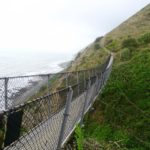 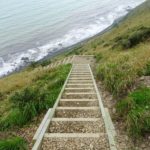 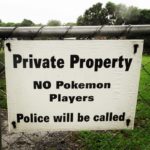 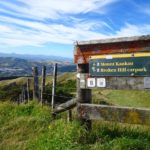 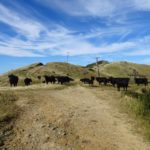 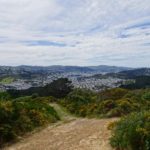 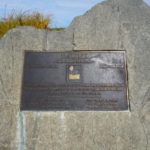 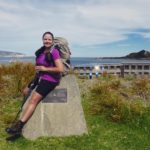 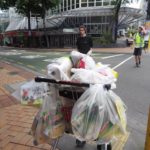